All That Glitters is Chanel

From humble beginnings to fashion’s greatest revolutionary and one of our all-time favourite designers, we’re thrilled to share the incredible story of how Coco Chanel became the industry’s biggest icon and the world’s leading pioneer of haute couture costume jewellery.

Born to working-class parents in the French town of Saumur on 19 August 1883 under the sign of Leo, Gabrielle Bonheur ‘Coco’ Chanel was sent to live in the orphanage at the convent of Aubazine at the age of 11 following the death of her mother. As well as learning to sew and developing a strength and resilience that would define her career, it is thought that the splendour and magnificence of the Catholic church provided divine inspiration for her bold, beautiful and iconic jewellery.

By marrying the austerity of the orphanage with the opulence of the church, and paring simple, understated silhouettes with decadent jewels, she created a signature style that not only changed the face of the fashion industry, but also endured the test of time.

Having first grabbed the attention of the Paris elite in 1910, creating hats under the name ‘Chanel Modes’, Coco went on to open a boutique in Deauville in 1913 and her first couture house in Biarritz in 1915. However, it wasn’t until she opened her Parisian couture house in 1918 at the now legendary, 31 Rue Cambon, that she burst on to the jewellery scene. In a career punctuated with iconic moments, Coco Chanel was a designer destined for success.

Although she was gracious enough to acknowledge the part played by fashion contemporary and fierce rival, Elsa Schiaparelli, Coco Chanel firmly took the credit for inventing costume jewellery or ‘Bijoux de Couture’ as it is also known. While undeniably both designers were pioneers of this ground-breaking jewellery movement, it was Chanel who instigated an entirely new and brazen way of wearing fake jewels and firmly took centre stage. Obviously and proudly false, she took great delight in paring fake gems with fine jewels and wearing them both with equal parade. These couture costume jewels were intended to be worn during the day with casual clothes, and while the pieces themselves were considered relatively conventional, the idea itself was a shocking one. It was artfully played out by the great lady herself, who would style yards of enormous fake pearls with cardigans and jumpers – a revolutionary combination and a strong fashion statement which heralded the decline of traditional jewellery etiquette, both fine and fake.

Following her time in England and her ten-year love affair with the Duke of Westminster, masses of fake jewelled necklaces including gilt chains, Baroque style coloured fake gems, gilt buttons in the style of an English footman’s uniform and jewels with a Slavic or a strong Byzantine flavour, such as festooned chains and huge medallions, were created by Chanel in the late 1930s and become de rigeur. All this incredulous accessorising only served to emphasise her simplified, understated garment design, which by now had also incorporated a love of English sweaters, waistcoats and Tweed. She advocated wearing jewellery at night, during the day and even on the beach. Not afraid to take risks, Coco was a determined woman with a clear vision, a strong sense of identity and a huge talent. 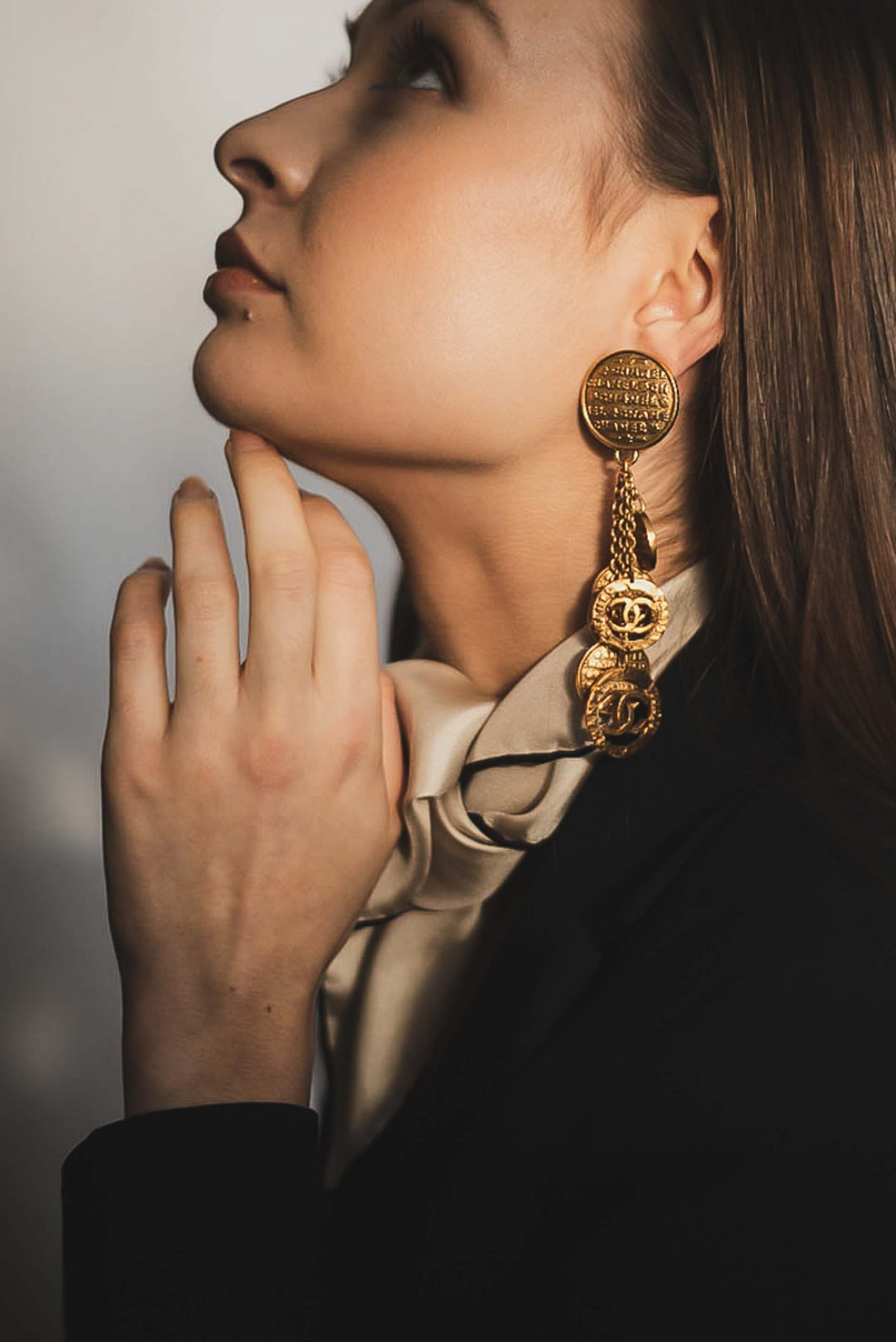 By 1932, at the height of the Great Depression, just when the world was enjoying Chanel’s tongue-in-cheek style and fake pearls were especially chic, even for high society Parisians, Coco Chanel shocked again. She designed a range of fine diamond jewellery which was the very antithesis of all she had stood for previously.

The fine jewellery industry had been seriously impacted by the Depression, increased taxes and the searing popularity of costume jewellery, and the International Diamond Guild turned to Chanel in a bid to reclaim interest in real gems. She did this in collaboration with designer and lover, Paul Iribe Cartier and presented a dazzling yet unconventional diamond jewellery collection upon eerily lifelike wax models in her private apartment in Paris. A collection like no other, it was centred around five timeless motifs inspired by her childhood – feathers, fringe, ribbon, the sun and stars. These special themes were carefully selected to represent Coco’s lucky number and to mirror the mosaics on the floor of the orphanage at Aubazine, where she spent her adolescence.
The Bijoux de Diamants was Chanel’s first and Coco’s only fine jewellery collection and it met with outstanding acclaim, much to the dismay of the Place Vendôme jewellers, who still considered her a mere couturière. When the exhibition ended, the jewels were dismantled, and the priceless, borrowed stones were hastily returned to their vaults.
What endured however, was a significant shift in fine jewellery style, artfully portrayed by Coco’s unique designs and carried through to many latter-day Chanel costume jewellery pieces. Her designs, and those iconic hallmarks of childhood, became an intrinsic part of the House of Chanel’s DNA and cemented its Codes for the future.

The fashion for tiaras was replaced by simple crescent-style hairpins, broad cuffs could be taken apart to serve as different pieces, and cascading necklaces that showered stones over the shoulders were hot property.

Now a high-profile personality at the very peak of her career, Coco moved in the elite circles of high society, even employing some of her aristocratic friends as designers. The young Duke Fulco di Verdura was responsible for designing the now iconic Chanel Maltese Cross cuff, before moving to the USA to set up his own hugely successful fine jewellery business of which needs no introduction. This cuff has been reimagined at the House every decade and magnificent new incarnations can be still found in present-day Chanel collections.

Chanel continued creating jewellery, most notably with master glass-maker, Maison Gripoix in a working relationship that surpassed all others and spanned the decades. These golden years proved to be the height of Coco’s jewellery creativity and acclaim.

Chanel closed the House in 1939 at the onset of war and reopened it in 1954, but the great era of exciting costume jewellery had passed. Nevertheless, in the 17 years that followed, she still produced some incredible pieces with jewellery legend, Robert Goossens. This creative alliance with Maison Goossens was the second most prolific jewellery partnership of her lengthy career.

The Return of Chanel

Much to everyone’s surprise, Coco Chanel ended her self-imposed exile in 1954 and made a triumphant return to Paris and the high-end fashion scene. Some say this was a direct response to the male-dominated couture scene (Dior, Givenchy, YSL) and its opposing effect on fashion for the modern independent woman. Chanel paired her classic suits with clusters of sautoirs, gilded chains interspersed with imitation pearls, coloured crystals and incredible Byzantine glass paste necklaces. She completed the look with neat ‘nest’ earrings featuring a centralised pearl – now a timeless, classic Chanel jewel.
She continued to create jewellery with the talented Suzanne Gripoix and founded a new partnership with Monsieur Bijou himself, Robert Goosens of Parisian House, Maison Goossens. This was an incredibly successful relationship and the Chanel jewels produced by Goossens during the 1950s until her death in 1971, stand proudly alongside the Maison Gripoix creations as some of the very best ever made. Goossens also created costume jewellery for other great couturiers such as Dior, YSL, Balenciaga and Givenchy. Both Houses continued to produce jewels for Chanel some years after her death and although the relationship with Maison Gripoix is no longer in place, Maison Goossens is now part of the stable of exceptional craft practitioners owned by Chanel’s subsidiary, Paraffection.

Fast forward to the eclectic eighties and the arrival of fashion powerhouse, Karl Lagerfeld. He took charge of the House of Chanel in 1982 and stands out as the designer who had the single most significant influence on costume jewellery during this exciting period.

With an ever-narrowing customer base and staid traditions, the House almost slid into obscurity in the years following Coco’s death, but Lagerfeld proved to be its saviour. He was without doubt, the architect of Chanel’s youthful image. He cleverly picked out the themes (now known as the Codes of the House) of the timeless classics that Coco had cleverly established, retaining the heritage and heart of the brand, while creating new designs with a modern 80s aesthetic that appealed once again, to a broader market.

In an inspired move, Lagerfeld appointed Victoire de Castellane as head of costume jewellery in 1984. The designs she produced during her 14-year tenure at the House are highly coveted by vintage costume jewellery collectors and Chanel lovers alike.

It proved to be a golden era for Chanel jewellery and pieces stemming from this period have a larger-than-life quality and were worn to ludicrous excess on the catwalks. The quality of these pieces was, and still is, truly exceptional, with Castellane continuing to work closely with Maisons Gripoix and Goossens. Styles featured multiple large, heavy gold chains, gobstopper-sized pearls, cabochon glass gems and remarkably high-quality gold plating. 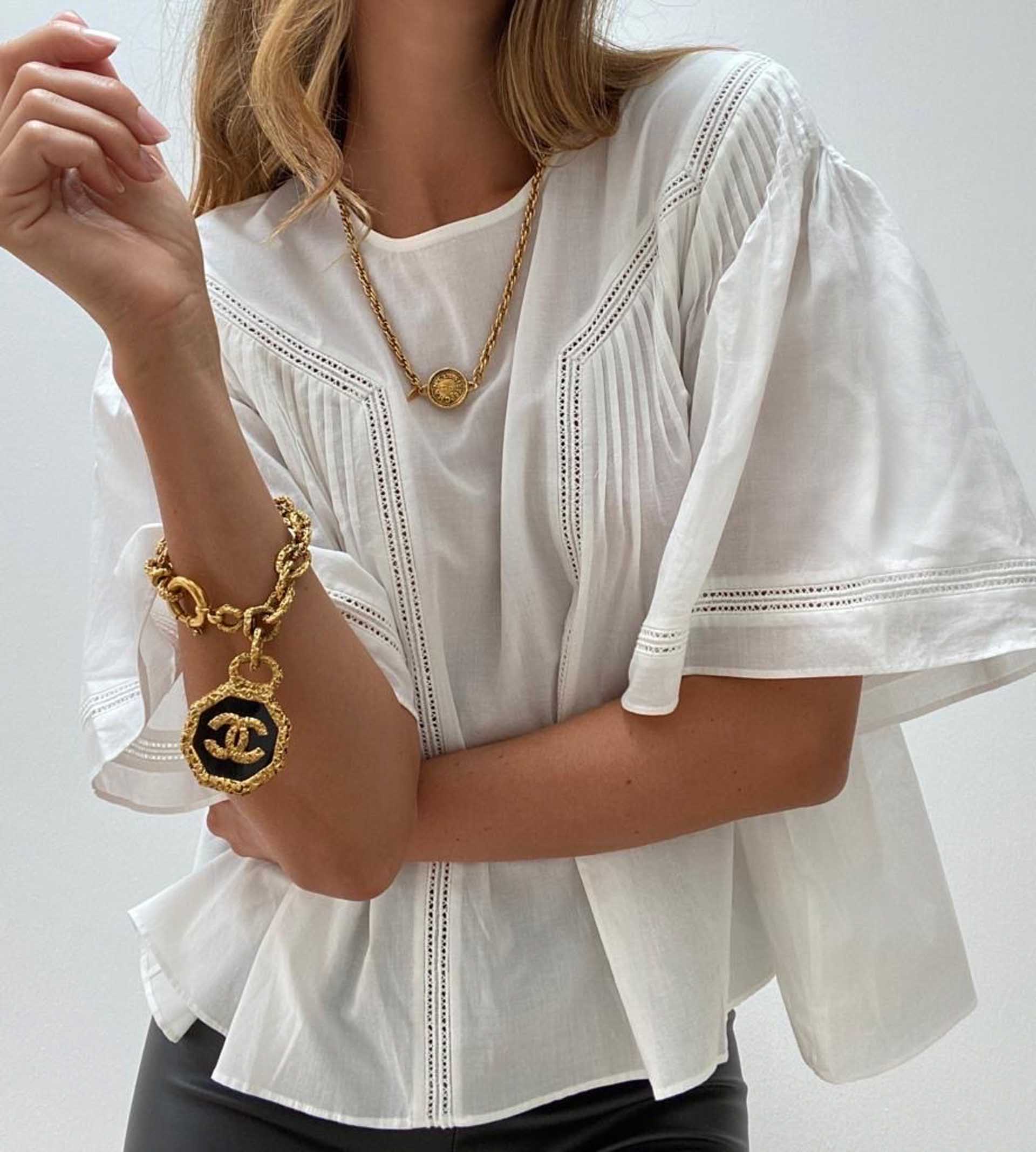 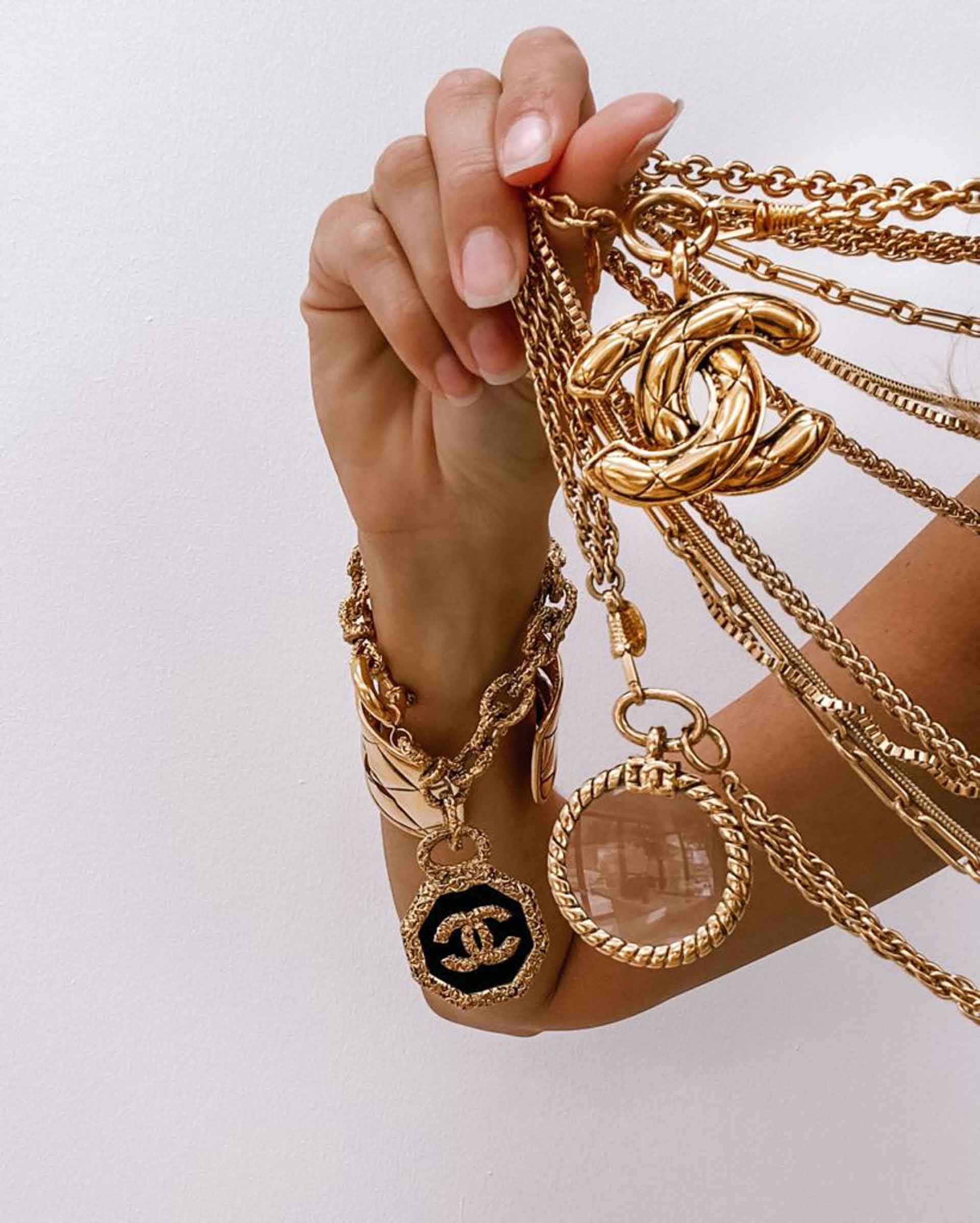 Additionally, the special motifs that signified important aspects of Coco’s life and collections were boldly resurrected and leveraged in excess, signifying a new way of recognising the elite luxury brand of Chanel. The motifs were many and varied and included the camellia (Chanel’s favourite flower), starbursts (linking to her 1920s fine jewellery collection) and the lion (drawing on her birth sign and enduring show of strength). Coco’s famed 2.55 handbag (which launched in 1955), patterns such as the Matelassé quilting and rhombus, wheat (a personal talisman for Coco who believed that it brought good fortune) and even the address of the famous Parisian Chanel boutique ‘31 Rue Cambon’, inspired new and exciting costume jewellery designs.

Perhaps the most ingenious of Lagerfeld and Castellane’s reinventions was the unashamed exploitation of the logo. By emblazoning CHANEL across their collections including the now-iconic cut-out pendants and cuffs and cleverly reviving Chanel’s interlocking CC insignia, inspired a new cult of logomania. The CC logo is instantly recognisable, famous worldwide and of course, uber cool – brand marketing at its very best.

Lagerfeld, like others before him since the mid-century, unashamedly leveraged ‘celebrity’, harnessing this valuable commodity to its full power for marketing purposes and brand identity, initially with his muse, Ines de la Fressange. In 1983 Ines became the first model to sign an exclusive modelling contract with the House of Chanel/Lagerfeld – not least because of her remarkable resemblance to its founder. Ines became the face of Chanel throughout the eighties and when she left in 1989, the new and exciting era of the supermodel took over.

The nineties were undoubtedly the most glamourous years for Chanel and the fashion industry as a whole. The iconic images of Linda Evangelista and Claudia Schiffer bejewelled from top-to-toe in Chanel, amassed an enormous following in the day and continue to draw the crowds, decades later. Chanel costume jewels from this instantly recognisable era are feverishly tracked down by current day stylists for jewel-laden editorials in prestigious fashion publications and celebrity royalty such as Beyoncé, Rihanna, Rita Ora. Who doesn’t want to own a piece of vintage Chanel?

Chanel jewels from this era and from Coco’s many years at the helm of the House, are much sought-after and rare pieces command dizzying prices. Costume jewellery from Lagerfeld’s own brand, KL, have also steadily risen in value since his death. With 80s and 90s styles back in vogue and the huge, seemingly lasting lure of the couture logo, vintage Chanel prices have risen rapidly in the last 2-3 years and there appears to be no slowing. A well-chosen piece of Chanel costume jewellery from the 1980-90s era, maintained in good condition, is certainly the investment piece of the moment. 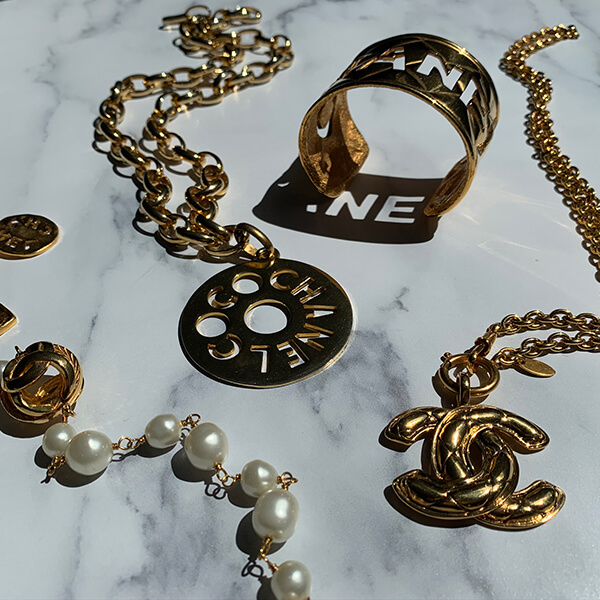 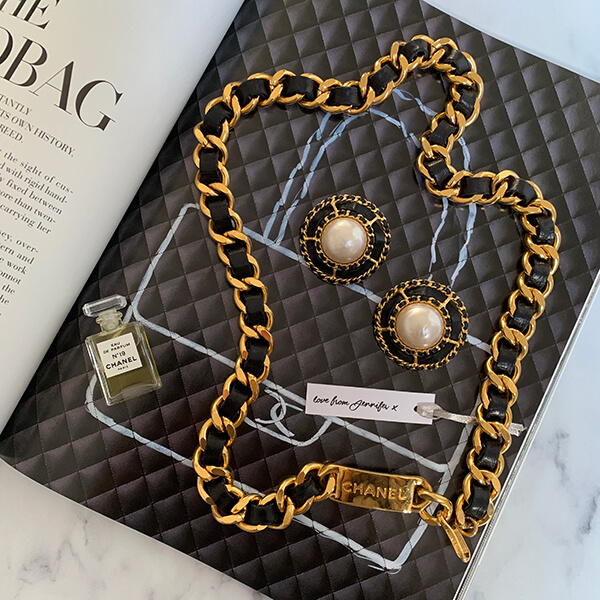 The designs Victoire de Castellane produced during her 14-year tenure at the House are highly coveted by jewellery collectors and Chanel lovers alike.